Hamburg, 28 February 2020 – The German hotel real estate market is on course for growth, according to the key findings of the Germany 2020 hotel market report by Engel & Völkers Hotel Consulting in cooperation with HQ revenue and Fairmas.

For 10 years now, the market has been growing continuously. The total hotel transaction volume in 2019 was EUR 4.9 billion—an increase of 22.5% compared to the previous year.

According to Engel & Völkers, who also released a report on the resort market in Germany, the above increase is due in particular to the rise in portfolio transactions and the sale of new developments last year. The top yield in the top 7 locations fell to 3.8% (previous year 4%).

At the same time, the hotel pipeline is excellently filled: More than 50,000 rooms are currently being newly built throughout Germany, especially also away from the major cities. Germany, therefore, occupies first place in Europe.

This is probably also due to the fact that Germany's popularity as a travel destination remains high: the number of overnight stays climbed to 496 million in 2019 (previous year: 478 million). This compares with a number of beds of 3.95 million (previous year 3.88 million). The average revenue per available room capacity (RevPAR) increased from EUR 73.2 to EUR 73.9.

"The mood in the German hotel market remains positive. Germany is very popular as a travel destination and the economic forecast also remains stable—let's hope that the Corona Virus does not dampen the good mood too much. As a global industry, tourism is directly affected by such crises," explains Andreas Ewald, Managing Partner of Engel & Völkers Hotel Consulting GmbH.

In most of the top seven locations, however, we are seeing a slight sideways movement in hotel performance—supply exceeds demand here, despite rising overnight stays. The only exceptions are Berlin and Cologne." Overall, according to Ewald, it can also be seen that operators are increasingly focusing on niche concepts and local color.

A glance at the top seven locations in Germany shows that business and leisure travel focuses on major cities, and the number of overnight stays increased everywhere last year—above all in Berlin, with a 4% increase to 34.2 million overnight stays. It is therefore not surprising that Berlin, with an average of 80% room occupancy, is at the top of the league in city comparison.

The demand is developing in a consistent relationship to the current bed supply of 154,000 beds. An oversupply is not expected until 2022. So the performance of Berlin hotels has also increased in the last 10 years continuously: RevPAR reached a new record level of EUR 80 (+ 18%) but remains in the lower midfield compared to the other German top locations.

"The biggest deal in the capital last year was the sale of the Hotel de Rome to sovereign wealth funds from Singapore GIC", says Ewald. "In Berlin, we are expecting a continued positive development of demand. The interest of investors in hotel properties in the Capital."

The Hanseatic city is very popular for tourists and business people and with 15.4 million overnight stays in 2019 (+ 6.1%) ranked third of the top 7 cities.

Meanwhile, for the second year in a row, supply is growing slightly faster than demand. Around 16,000 beds are currently in the planning or construction stage; to fill these, an additional 18.5 million overnight stays by 2022 must be achieved. At the moment there are declines in both occupancy and net room rates. Nevertheless, the current RevPAR is EUR 89 and thus in third place behind Munich and Cologne.

"2019 was a weak year for the Hamburg hotel investment market with a total volume of EUR 180 million. A prominent sale was the forward deal of "the niu Bricks" in Hamburg Eppendorf. However, due to the well-filled project pipeline and the attractive and stable real estate market, we expect an increase in transactions this year", comments Ewald.

With 18.2 million overnight stays in 2019, an increase of 6.8%, Munich remains the second most popular city destination in Germany.

Rising tourism volumes and the highest room rates in Germany have led to numerous project developments–such as around Parkstadt Schwabing, the Ostbahnhof railway station, or the Munich Fair Centre. However, over the last five years supply has overtaken demand, leading to a sideways movement in performance: the average room occupancy dropped by 4%, the RevPAR is EUR 96, around 3% below the 2014 value.

"Munich is stagnating, in the best possible sense, at the highest level. Since 2014, the relative increase in supply has overtaken the development of demand, but investments remain highly exciting due to Germany's highest RevPAR", says Matthias Hautli, Director of Engel & Völkers Hotel Consulting.

Frankfurt was able to continue the positive growth trend of the last ten years in 2019. The number of overnight stays increased by 6.3% to 10.8 million. This ranks the banking city in fourth place behind Berlin, Munich, and Hamburg.

Parallel to the development of demand, bed capacity has increased in recent years—by 36% since 2014. 2,000 new beds were added in 2019. The relative increase in supply has been overtaking the development of demand for some years now. The room occupancy rate dropped by 2% last year, the RevPAR to EUR 74. Among the top 7 locations, Frankfurt has the weakest room occupancy rate; the 70% hurdle was undercut again for the first time in 2019.

"The transaction volume in 2019 was EUR 770 million, around 45% above the previous year. This also includes transactions around Frankfurt Airport. Frankfurt remains an interesting hotel investment location, but needs new demand generators in order to achieve better utilization of bed capacities," explains Ewald.

Düsseldorf: Future development of supply will shape the hotel market

Even though tourism demand in the capital of North Rhine-Westphalia has been developing positively since 2014, growth in 2019 was far from being as strong as in previous years. In 2019, the number of overnight stays increased by 2.2% to 5 million.

In a comparison of the top 7, Düsseldorf thus ranks in sixth place. The net room rate (ADR) increased by 1.7% to EUR 112, while RevPAR increased to EUR 78 (+ 1.5%). At the end of 2019, the number of beds in Düsseldorf was still 28,000, and the number is to be increased considerably by 2022 with a further 11,000 beds. The new offers are almost exclusively in the budget to the mid-scale range, which means that the competitive pressure is likely to increase most in this area.

"11,000 beds in the pipeline will require an additional 6.9 million overnight stays by 2022, and it remains to be seen to what extent this need can be met," explains Hautli.

With around 8.2 million overnight stays, Cologne has set a new record.

This growth is fueled by the growing interest of domestic and foreign tourists and overnight stays due to business. In comparison, the number of offered beds has only developed marginally with a plus of 5%. The result: Cologne is a lasting hotel market. The RevPAR has developed most positively here over the past 5 years among all the German top 7 locations and, with an increase of around 28%, is now at EUR 90.

"Compared to the previous year, Cologne was able to increase its transaction volume by around 23% to EUR 390 million. The significant increase in overnight stays combined with a balanced demand structure formed the basis for a positive market forecast. The manageable hotel pipeline also supports the sustainability of the hotel market. Interest in the Cologne hotel market, therefore, remains high," Ewald explains.

The number of overnight stays in the capital of Baden-Württemberg has been rising for years. This trend will also continue in 2019 with a plus of 4.5%.

The number of new projects in Stuttgart is above average: Around 4,000 additional beds are expected by 2022, an increase of 18%. Further capacities are being created around Stuttgart airport. In 2019, ADRs declined for the first time compared to the previous year and reached a value of EUR 108.

Resorts in Germany: A Recipe for Success

Resorts in Germany: A Recipe for Success 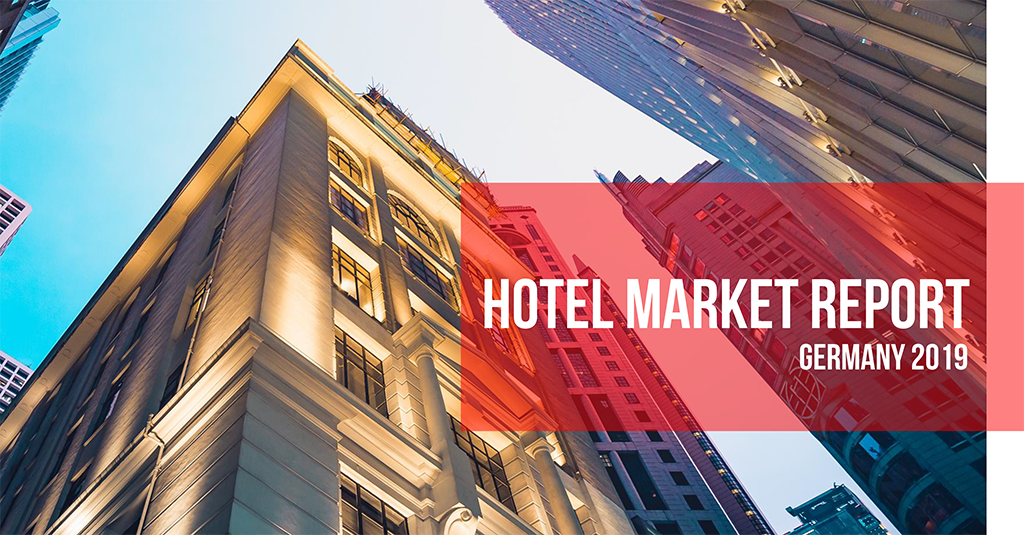